Developmental kinesiology predominantly with a focus on the period of the first 12 to 18 months after birth is a significant contribution to the study of movement and to the therapy of locomotive disorders. Of course, the development of motor skills takes place during the intrauterine life and continues after the 18th month of life throughout the whole childhood and whole life in a sense. According to actual knowledge, the first 18 months after birth seem to be the most important because the fundamental changes that determine the upcoming development take place in this period.

Innate, genetically determined movement programs provide the basic bodily requirements. Beside these survival programs, the child is gradually able to establish contact with its surroundings, e.g., by smiling at its mother or, conversely, crying in frustration.

According to Vojta’s conception, the child is born with rather sophisticated movement programs and implements them gradually into its motor skills. Kolář 1 states that with suitable afferent stimulation, the child could be led to a postural situation, in which it would perform a movement it wouldn’t have been able to perform until during the next level of its later development. On the other hand, there is an opinion stating, that the brain of a new born is something of a “tabula rasa”, containing only very simple movement patterns. The child builds its motor skills on them through contact with its surroundings by trial and error. Innate interest in the surroundings, curiosity, yearning for orientation and establishment of the contact and communication are of fundamental importance. All these features constitute the essence for inborn effort to stand upright that is obvious in every healthy child.

The balance between the normal and pathological development is predisposed by intrinsic and extrinsic conditions. Intrinsic conditions contain genetic talents (thus, the respective inborn motion programs) and the features that have been obtained during the previous ontogenesis. Extrinsic conditions involve the satisfaction of basic vital needs (food, warmth, light) and a sufficient amount of outer impulses that would stimulate and satisfy the child’s interest in its surroundings and its own body. Normal genetic makeup, normal extrinsic conditions and normal previous development of the individual constitute the necessary preconditions for normal development. Not fulfilling them urges the use of substitute and compensatory mechanisms of the body.

The development of the child in its first year of life is characterised by its gradual adoption of a vertical stance associated with a narrowing of the support base and increasing lability of the position. Optimally, this stance relates to righting from the existing flection position and inner rotation of the root joints of the limbs to straightened posture, allowing outer rotation in the root joints of the limbs.

Upright posture is primarily maintained thanks to the so-called postural muscles. During optimal development, phasic muscles join this function too. Their involvement places great demands on the control functions of the CNS. It would be insufficient if the course of development was incorrect or the CNS control functions were impaired. In this case, the proportion of the phasic muscles involved in the utilisation of the upright posture decreases as the proportion of the postural muscles increases. This is reflected by typical clinical findings.

Although the upright posture puts greater demands on maintaining balance, it provides an improved sense of orientation, and it frees the hands for grasping objects of interest. Also, it makes more effective locomotion possible (Vařeka, Dvořák, 1999).2

The prerequisite of upright posture is the ability to create a common centre of gravity for the segments of the body and to maintain its projection within the supportive base. This ability is provided by the activity of the muscles controlled by the CNS. Before performing a certain movement, a man should be able to assume an active position first, which could be called the posture. The adjective “active” is important here as it differentiates posture – the active position – from the passive position (e.g. “stabilised position” for transportation of an unconscious person). Every person assumes a posture spontaneously (if he/she wasn’t in a deep state of unconsciousness), even when sleeping. This ability could be called postural activity.

The term postural reactivity refers to the ability to react to extrinsic or intrinsic changes and to maintain the existing active position or to take a new, more advantageous one.

Attitude is a guided change in posture before the initiation of the movement, when the very movement hasn’t happened yet. This activity could be demonstrated by, e.g., EMG examination. Nevertheless, even without a complicated technical apparatus, it is possible to presume what move the observed person is going to make. For example, before stepping forward, the person transfers the weight above the now imminent supportive lower leg and releases the other limb for the next step. Concurrently, the person takes the corresponding posture of the torso, upper limbs, neck and head. Adequate muscle tone is an inseparable part of posture, which constitutes the essence of all motor skills. Thus, we can deduce that: posture + movement anticipation = attitude. 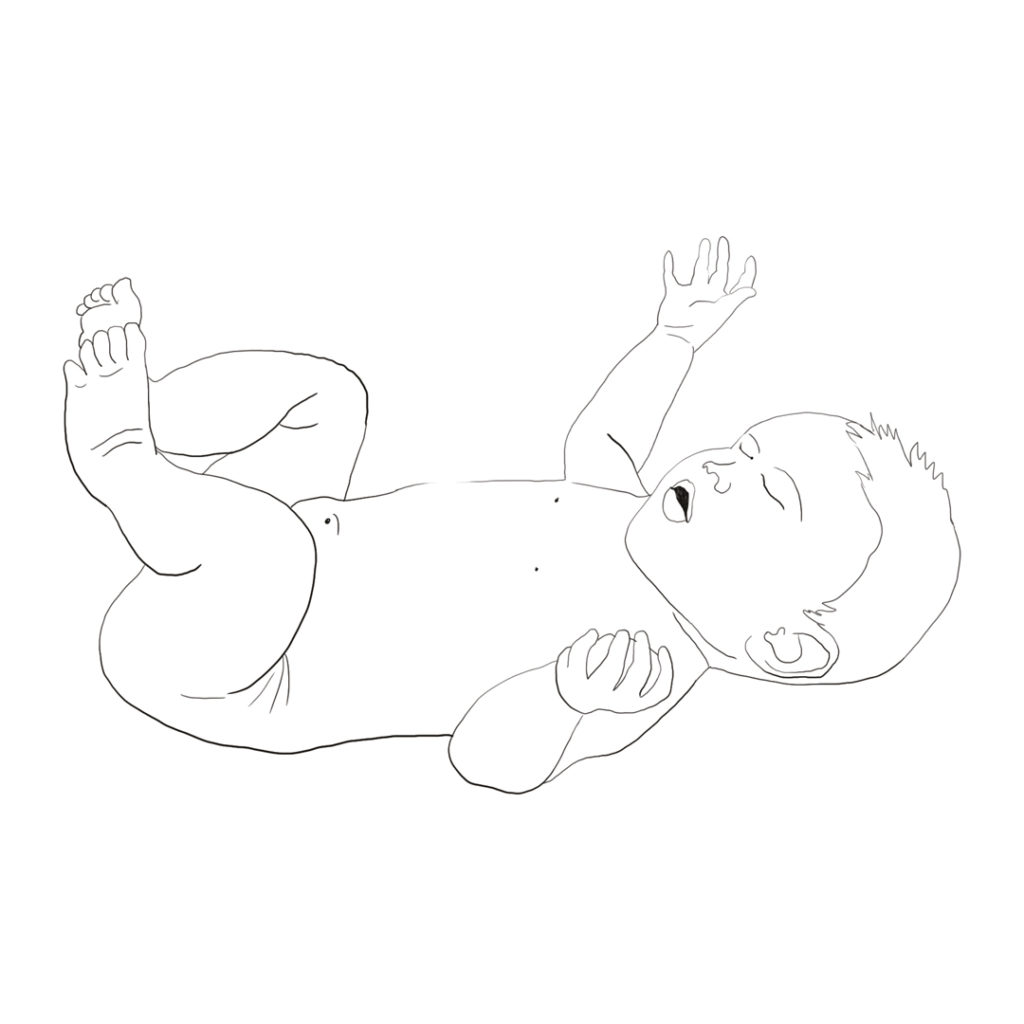 The question of primacy is interesting, but it isn’t so important. The content of these words and their correct understanding are a more crucial matter. The Czech translation is misleading and it could lead to false interpretation that the posture is secondary to the movement and divided from it. The posture is always in both the beginning and the end of any movement (refer to Magnus) and at the same time, one of its components.

Spontaneous motor development of a child from the birth to the end of the development passes through essential milestones and is accomplished with: 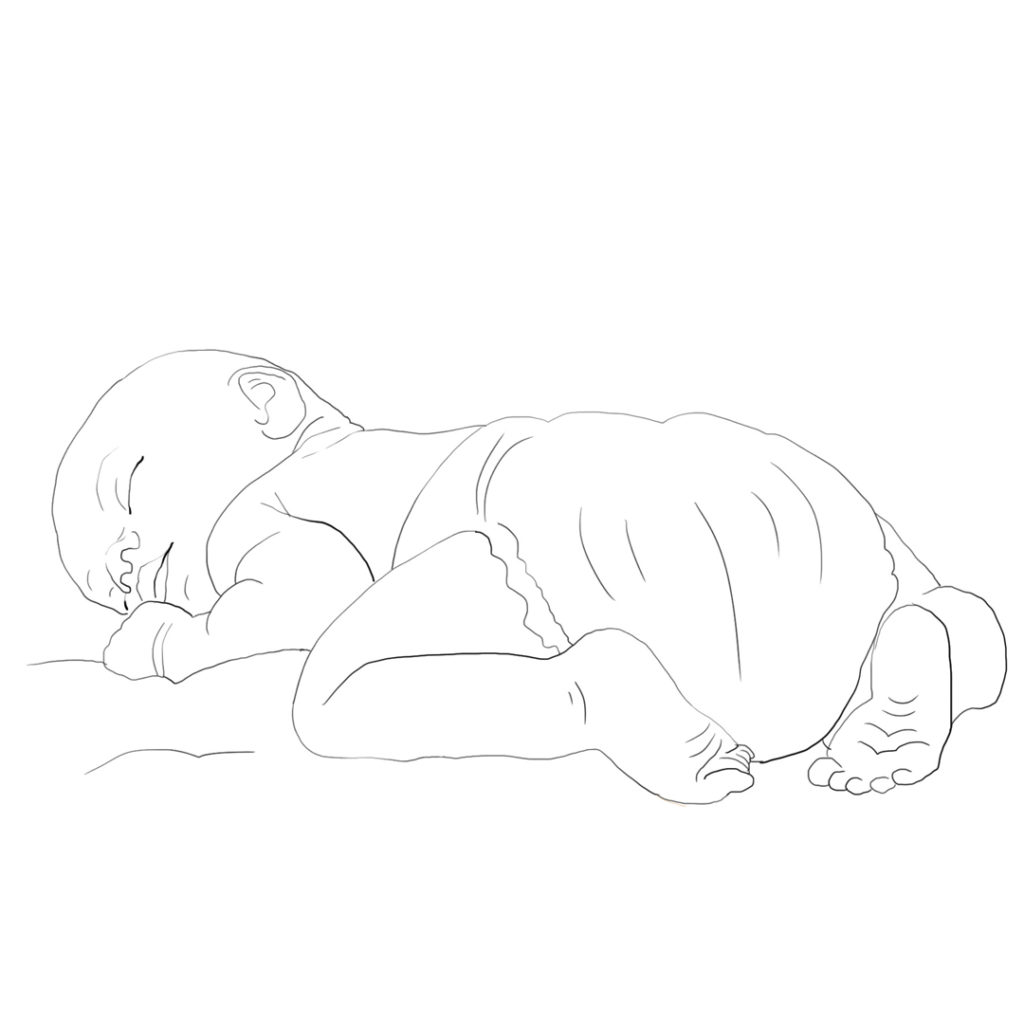 These milestones could be described by changes in:

For the needs of the developmental kinesiology, the classification introduced by Vojta is routinely used. It classifies the sides of the body into:

Classification of the points of support and points of motion: 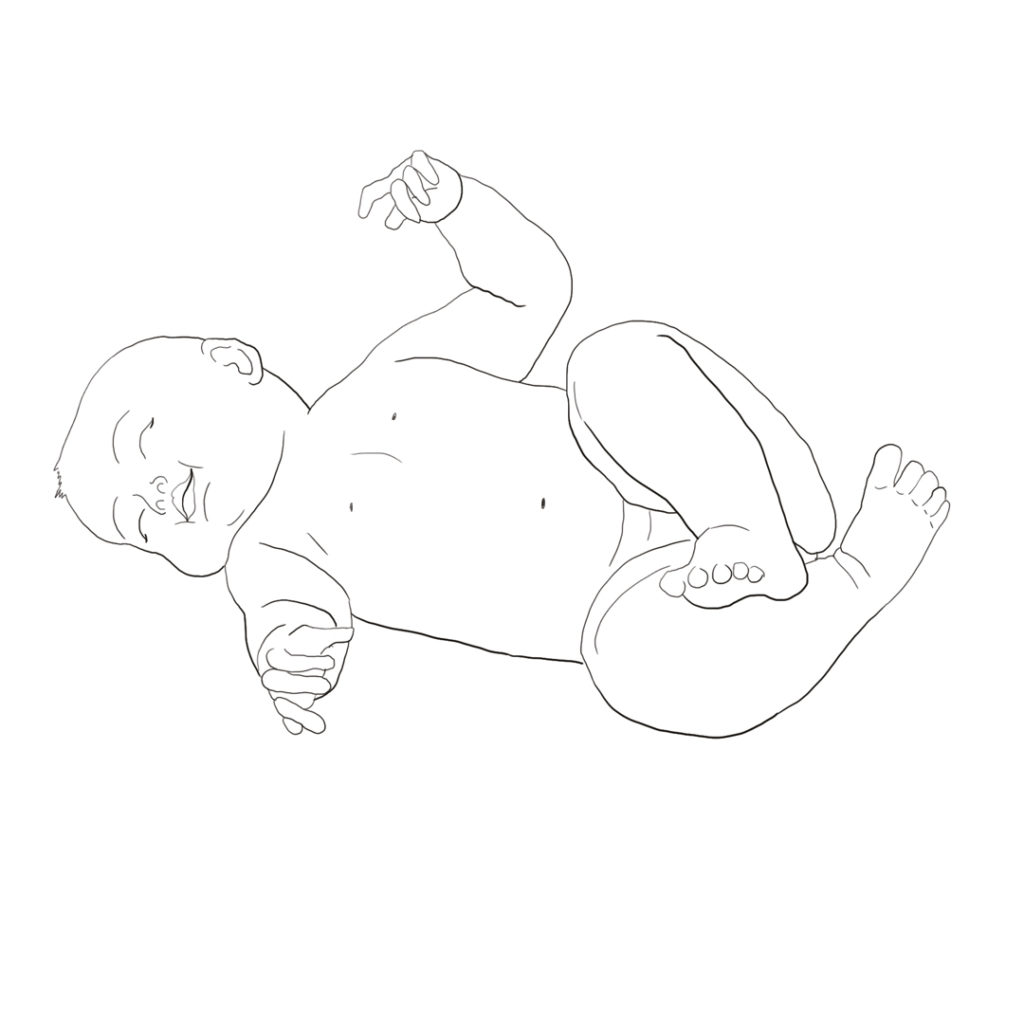 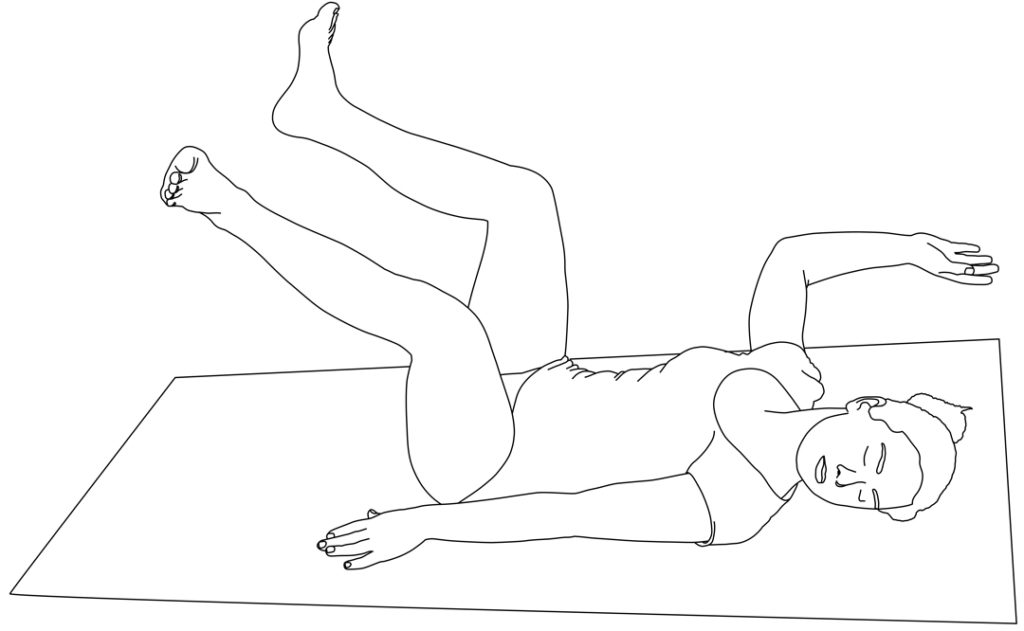 Initiation of the turning from the supine position to the side is followed by a change of points of support and the points of motion; the movement is initiated with the turning of the head, or in some cases the movement of the eyes, towards an object of interest.

PF On the head, it is released from the support to let the head turn; 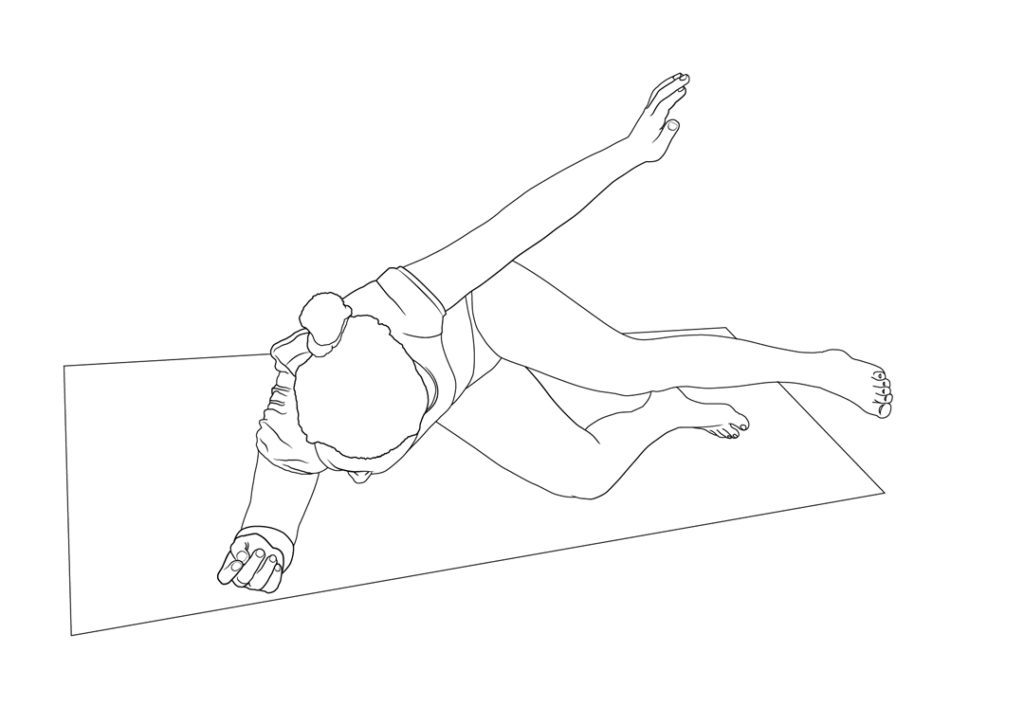 PM The hand on the mandibular site becomes the “leading” PM;

Position on the side

Stable position that enables the hand on the mandibular side to become the “exploring” hand in the space in front of the face. The first functional differentiation of the upper limbs to supportive and phasic function is being formed. The support has 4, or in some cases, 5 points. The head resting on the side makes the 5th point.

PF The occipital upper limb has its PF at the shoulder and at the elbow.

PF The occipital lower limb has its PF at the hip and at the knee.

Position on the side

PM The head gets out of the support (for a while), and the visual perimeter is elevated;

PM The hand on the mandibular side has the range of motion above and to the front;

Turning from the position on the side to the belly and back:

Support on the PF at the elbow on the occipital side would release the load at the shoulder and the whole chest becomes a PM.

PF at the hip joint at the occipital side becomes the support for this unstable situation;

PF at the knee on the occipital side begins to shift caudally as the lower limb extends;

PM on the hand on the mandibular side accomplishes the turn to the belly;

PM of the foot on the mandibular side helps to turn the pelvis on the belly, while the lower limb extends fully.

Position on the stomach – 3rd to 5th month of development

Stabile position on the stomach is provided by the support of the upper limbs at the forearms:

PF Elbows including the whole surface of the forearms;

PM It’s the head and its free posture on the extended nape that enables significant widening of the rotation of the cervical spine and thus the visual perimeter.

Position on the stomach – 5th to 6th month of development: 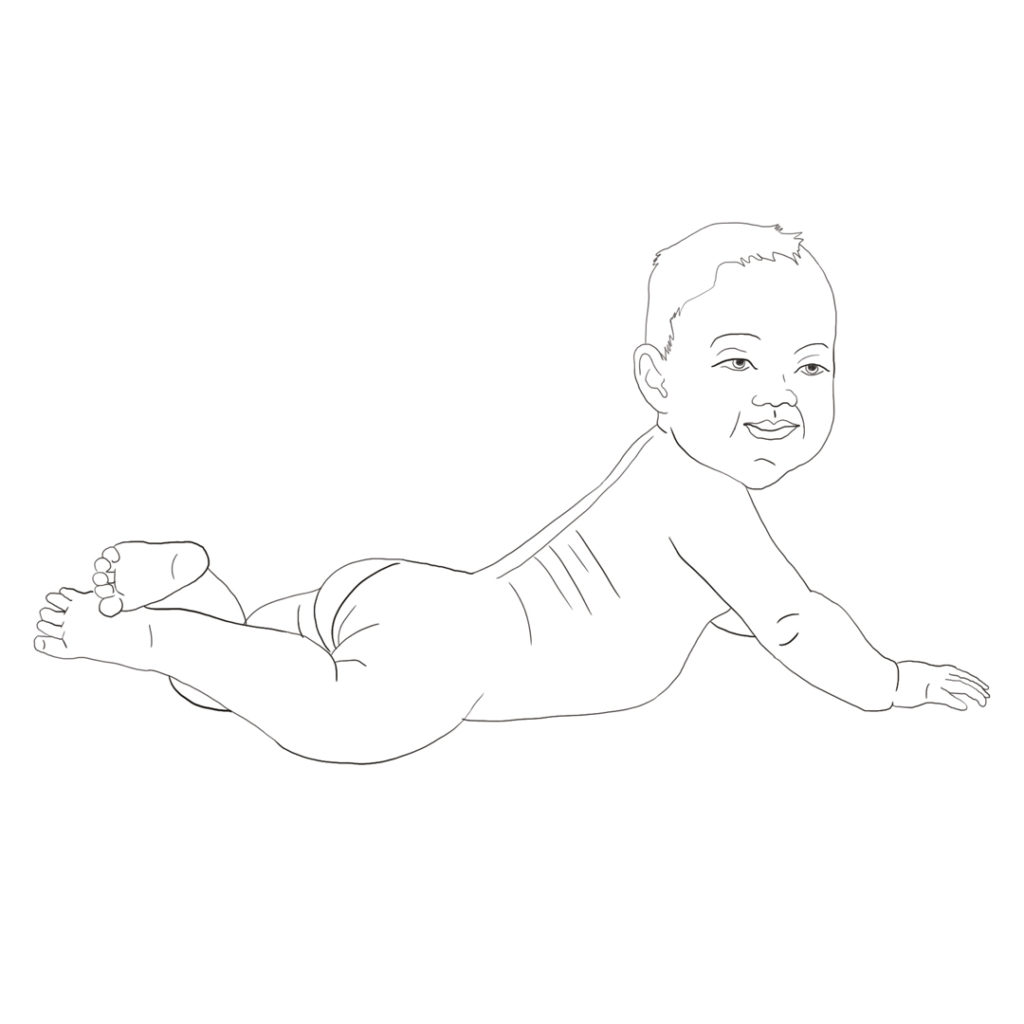 A change in the support takes place.

PF They shift to the open palms of both hands;

PF At the symphysis it shifts toward the posterior;

PM The head allows a view from “the upper floor”; the extension of the cervical and thoracic spine increases the range of rotatory movement of the vertebrae and thus there is further increase in the visual perimeter.

Position on the stomach – 5th to 6th month of development:

There is another change in the support that enables the release of one hand from the support to enable the grip.

PF It stays at the occipital upper limb and the whole surface of the forearm;

PF It shifts from symphysis to the hip joint on the occipital side.

Position on the stomach – 5th to 6th month of development

PM the hand on the mandibular site releases from the support and becomes the “grip organ” that satisfies the explorative needs of the child. The hand begins to have the ability of stereognosis. Until then, the child’s mouth served as the only possibility to explore the outer world. 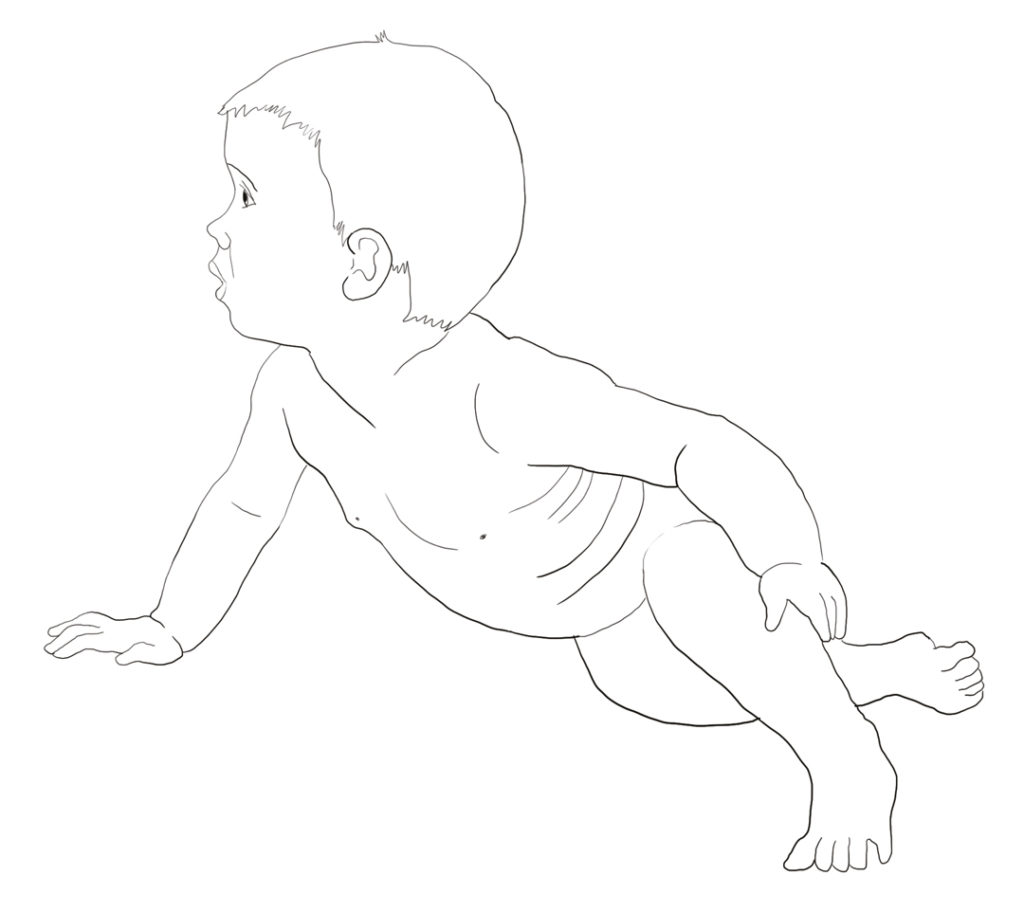 The oblique sitting position enables the transition to crawling on all fours:

PF It is at the open hand on the occipital side;

PF It is at the hip joint on the occipital side;

PF The whole surface of the thigh and the knee on the occipital side;

PM It’s the head that gets to higher position again. The whole cervical and thoracic spine is extended and enables an increase in the rotation and wider view;

PM The hand on the mandibular side gets into the vertical axis above the head.

Crawling on all fours – 9th to 10th month of development:

It is enabled by full differentiation of the function of the support and movement in both upper and lower limbs;

It is basic precondition for the upcoming bipedal gait;

PF support on the knee of the mandibular leg;