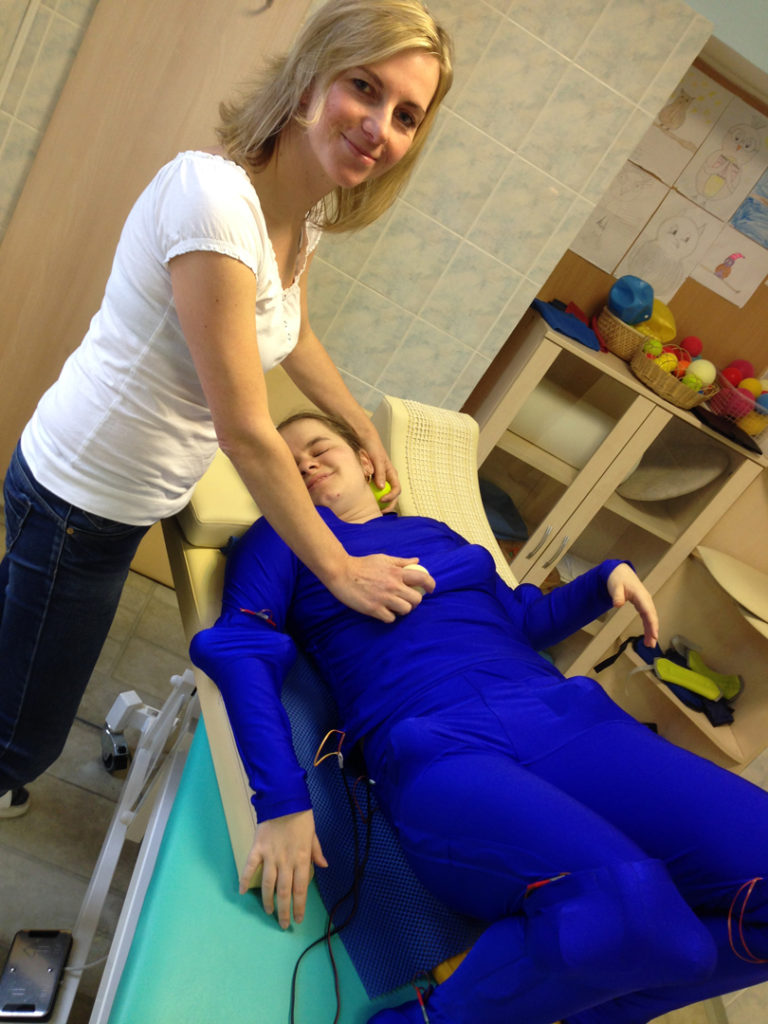 Basic Initial Conditions and Positions for Inducing the Reflexes

Basic stimulation of reflex zones, placement and directions of the stimulation

Supporting Positions and the Equipment Facilitating the Induction of the Reflex

External Conditions of Stimulation for VM2G

Education of the patients in VM2G

Observing the Reactions Induced by VM2G Stimulation in the Patients

Repeating the Therapy within One Day

Reflexive Response of “the System” of the Patient in VM2G Therapy

Video – therapy of children and adolescents

Illustration of Implementation of Tilted Medical Loungers and Labilising Discs

A seven-year old patient was admitted to our care due to milder disorder of the posture of the body. The patient’s mother worried about the future development of the locomotive apparatus of her daughter because chronic back pain had been apparent in the family for several generations; the mother herself had such problems, too. The patient admitted that she also experienced back pain sometimes but couldn’t localise it specifically. The patient didn’t have any other problems.

Description of the Problem
(Clinical Findings)

The history of the patient didn’t reveal any remarkable deviations from the normal psychomotor development. She started to walk at the end of the first year of life. The examination of the basic stereotypical movements was essentially normal. The only problem determined was weak diaphragmatic breathing. Autonomic regulation of the standing and the general axis of the body involved the deviations from the norm in the forward pull of the whole body in the ventral direction. Basic sagittal axis originating from the centre of the outer ankle joint didn’t come through the expected physiological points. In standing, there was apparent greater stress on the tips of feet than the heels. There was ventral tilt of the pelvis and ventral rotation of both shoulder girdles. The pelvis was tilted ventrally and the shoulder girdles were protracted. Her head was pulled forward, so it didn’t align with the axis.

Expert Explanation of the Problem

The origin of the disorder of the autonomic regulation of the posture of the body could most probably be caused by hereditary predisposition. The mother confirmed that the posture of her daughter was similar to her adolescent posture. During the first year of age, the patient could have experience a mild form of central coordination disorder, which would have contributed to impairment of the regulation of the motor skills. The relevant misalignment could be observed in the ventral tilt of the pelvis and the ventral posture of both shoulder girdles. Because of the family predispositions to chronic problems with the locomotive apparatus, the effort of the mother to seek a solution for her daughter to prevent eventual future problem, i.e. spinal problems, could be considered very prudent.

Illustration of the Solution

Although the problem with the posture of the body in this patient had seemed to be quite simple to solve, its correction took six years. The patient’s mother was highly motivated to help her daughter and so the therapy was carried out very carefully. The frequency of visits was set to once every four weeks. Improvement in the posture of the head, pelvis and shoulders began to be successful, especially thanks to the exercises on the tilted surface of the medical lounge. The longitudinal tilt of the medical lounge was technically provided by the adjustable setting of the lounger legs. The transverse tilt was secured by implementation of the training underlay. The balance discs and labilising restraints comprised the other aids that accelerated the improvement in posture of the body. The patient didn’t complain about back pain during the therapy.

Explanation of the Solution

The chosen therapeutic method of labilising the supporting points during the reflex exercises significantly helped to provoke the repair program of the regulation of the body. It was necessary to target the stimulation more on the involvement of the anteroposterior muscle chains than the oblique chains. Although it might seem that the curing effect hadn’t come for several months and the changes towards a normal state progressed very slowly, the direction of the therapy proved to be correct. Normalising changes were fully ossified within the following development and the final effect of the therapy brought very good results. It’s interesting that VM2G successfully intervened also in this case of assumed hereditary preconditions of the patient’s problems.

The exercise equipment on the tilted longitudinal surface in combination with tilted transverse surface significantly improved the correct therapeutic targeting. Combining both angles creates the conditions for activation of the torsion biomechanism of the body, whose direct muscular chains head through its imaginary centre. These torsion conditions were concurrently used to labilise the supporting points of the body. By joining the difficult initial spatial and adhesive preconditions, the induction and maintenance of the stimulation reflex become extremely challenging for the brain. Thanks to this, the therapeutic reflex runs extremely precisely and could be perceived in a specific part of the body. Implementation of this kind of therapy puts special demands on the physiotherapist because he has to manage to create the optimal extent of the load and explain the implementation of the stimulation as part of home exercise correctly. The optimal extent of the load is based on the current ongoing reflex response in the patient and on the actual dispositions of the patient.